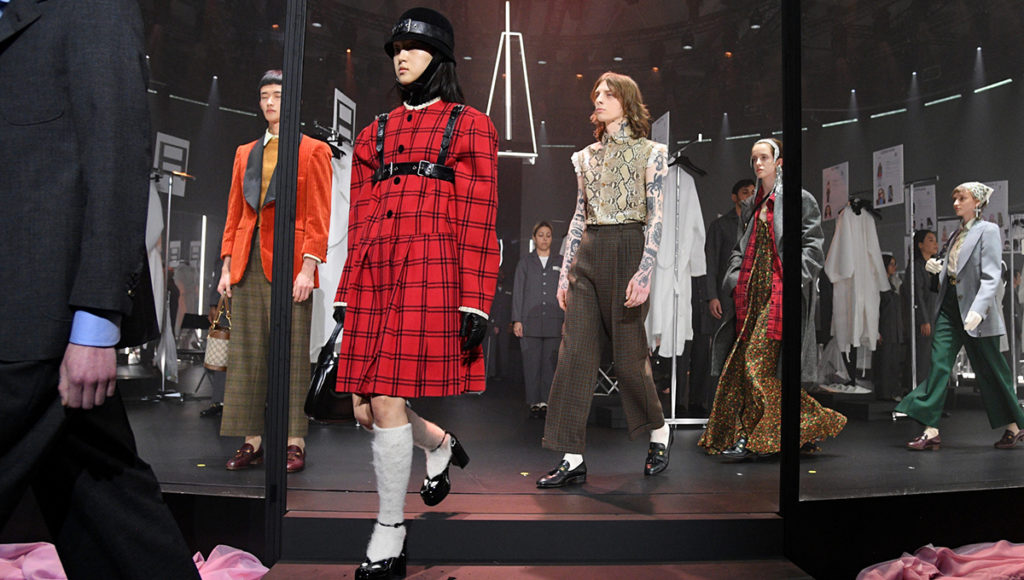 During the Milan Fashion week Fall Winter 2020-21, the designers created several spectacular suggestive outfits, sometimes going so far as to confuse the viewer.

Is the outfitting itself also the fashion show?

MILAN FASHION WEEK 2020: WHEN WE COULD STILL GATHER

Years and years seem to have passed since the last parade in which it was possible to gather quietly, but in reality, Milan Fashion Week was in the last week of February, when Coronavirus began to spread in Italy.

This year, probably even more than in past years, designers have gone in search of their own locations and created their catwalks in such a way as to recreate real environments that involved the viewer and transported them into a kind of parallel reality.

Precisely because of the epidemiological situation, some of these parades have been postponed, cancelled or streamed, thus having to give up the majestic installations. Many others, however, took place (almost) regularly.

MILAN FASHION WEEK 2020: THE BEST LOCATIONS OF THIS YEAR

First of all stands out Gucci that thanks to Alessandro Michele builds a huge rotating carousel(which historically is a carousel with horses and carriages in which children lovingly have fun). Inside this rotating structure there are the real secrets of the backstage of a traditional fashion show then make-up artists, costume designers and clothes hanging on hangers.

All marked by incessant lights coming from the top and a giant metronome on the back lit by a neon of light.
At the end the models come out of the carousel to pass directly among the audience.
Captivating.

The second location is diametrically opposed to the first. Perhaps the need to invoke a minimalist aesthetic contrasting the non-minimalist society of today. Two rows of chairs are arranged inside the white space of the design house that form a sort of parallelepiped to which the models walk around, one after the other and then stop and sit each on one of these. You could almost call it a “noisy silence” that allows you to concentrate as much attention on the parade itself.

A further riot of emotions comes from the presentation of Fendi’s collection that builds in its historic venue a huge pink carpet from the walls to the floor on which the public is placed, leaving free a narrow strip of fabric.

The mode goes quickly showing the dress from the collection; they are so close that is like they touching each other and touching the public too.

It’s like to be in a contemporary museo when all the people, that are really a lot, are looking the same thing.

It could be dating back to the Baroque period the Moschino parade that presents its collection in an installation that may vaguely recall the Palace of Versailles. High ceilings, drop crystal chandeliers and glass walkway very bright almost to mirror both the models and the imposing eighteenth-century house built in the background. Flamboyant and very showy clothes that, however, seem to be one with the surrounding environment.

Finally, Prada begins with a hypnotic construction for its presentation. A quadrilateral with white and black continuous striped flooring, contrasted by a large monument in the middle and side openings coloured with the typical red of the brand.

From right to left, from left to right, several models enter at once as if they wanted to hypnotize the viewer in a high stand similar to a palasport.

These are just some of the most interesting locations of Milano Fashion Week 2020 to confirm that the installation is itself the fashion show and that you will probably see more and more interesting situations.